Death of a King - What's it all about? 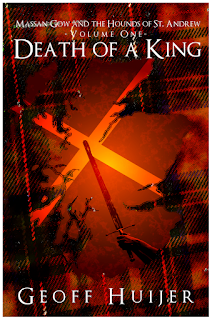 18th March, 1286 AD. King Alexander III, King of Scots heads to Fife ignoring all advice to wait until a violent snow storm subsides; he yearns to see his beautiful, pregnant wife. He never makes it. His crumpled body is eventually found along with that of his horse suggesting they stumbled in the white-out and crashed to the rocks below the coastline’s cliffs.

A young local lad, Massan Gow, is found wandering along the beach by the search party out looking for the king and soon he becomes embroiled in a deadly game of cat and mouse accused of regicide.
He is held by the Earl of Fife and decides he has to take his destiny into his own hands but that may be more complicated than it seems. His mother becomes accused of witchcraft by the secretive society known as the Hounds of St Andrew. So, not only does the death of a king throw the country into chaos but a young boy’s family too; and Massan now has to fight to clear his and his family’s name.

Double-dealing, hidden agendas, personal tragedies and raw action sweep across medieval Scotland, southern Spain and the Welsh Marches in England. Death of a King is the first enthralling novel of the Massan Gow and the Hounds of St Andrew series.